Welcome to Week 5 of the Wise Not Withered Character Showcase! Today we are presenting the Widowed Writer, 40-year-old Ahlaam. I am currently losing my voice a little bit, so please bear with me again in this episode!

My initial ideas for this character— the youngest of all twenty-five—was that her husband passes away unexpectedly, and she struggles to let herself feel the pain and move through the grieving process. I knew from the beginning that I wanted her to also have a close relationship with her older sister, and that she would have vivid, colorful dreams.

The writer I found for this character is the talented Kanisha Vincent, from Trinidad and Tobago in the Caribbean. Kanisha’s poems on Instagram were so beautifully put together with lots of lovely imagery, and she was one of the few writers I contacted directly about a specific character.

As I mentioned in previous episodes, one of the greatest things about this project is the huge variety of styles across all of the writers that I recruited. Kanisha did a wonderful job of telling a story through a combination of dreamscapes and reality, sometimes blurring the line in a way that makes the reader feel the turmoil that Ahlaam herself is experiencing.

The story begins with what seems like reality: Ahlaam and her husband Yaromir are enjoying each other’s company over breakfast, with beautiful details about their surroundings. Right as they kiss, the entire scene shatters and Ahlaam wakes up, realizing she was dreaming, and the truth about Yaromir hits her hard once again. Ahlaam’s older sister Tia is with her throughout the story, looking after her and doing her best to support her sister with her presence and cooking.

Ahlaam continues to slip in and out of consciousness, and in her dreams she interacts with and sees memories of Yaromir. One of the last scenes is another dream where Yaromir, or rather a projection of him, encourages her to start writing again.

“She had a lot of work to do. She was going to create a memoir that would honour Yaromir’s memory. The accident had taken him from her physically but he would continue to live on in her heart. The pain would probably never go away completely, but her love would continue to burn bright.”

The illustrator I found for this character was Jennifer Geller, a Russian artist who has lived in many different places around the world. As with all of the Wise Not Withered stories that involve multiple characters who are not blood-related, the widowed writer and her husband are also an interracial couple, Ahlaam reflecting Kanisha’s Afro-Caribbean background, and Yaromir reflecting Jennifer’s Russian ethnicity. When the three of us were throwing around ideas about the story at the beginning, Kanisha made sure to ask Jennifer specific questions about her culture so that Ahlaam’s husband Yaromir would have an evidently Russian influence. She ended up using the words “solnce” (the sun) and “dorogaya” (darling) as terms of endearment from Yaromir in Ahlaam’s dreams, which added a really lovely touch to the story.

The illustrations Jennifer made for Ahlaam’s story are absolutely gorgeous. I especially love the ones she created with dreamy backgrounds that remind me of a star-filled night sky. 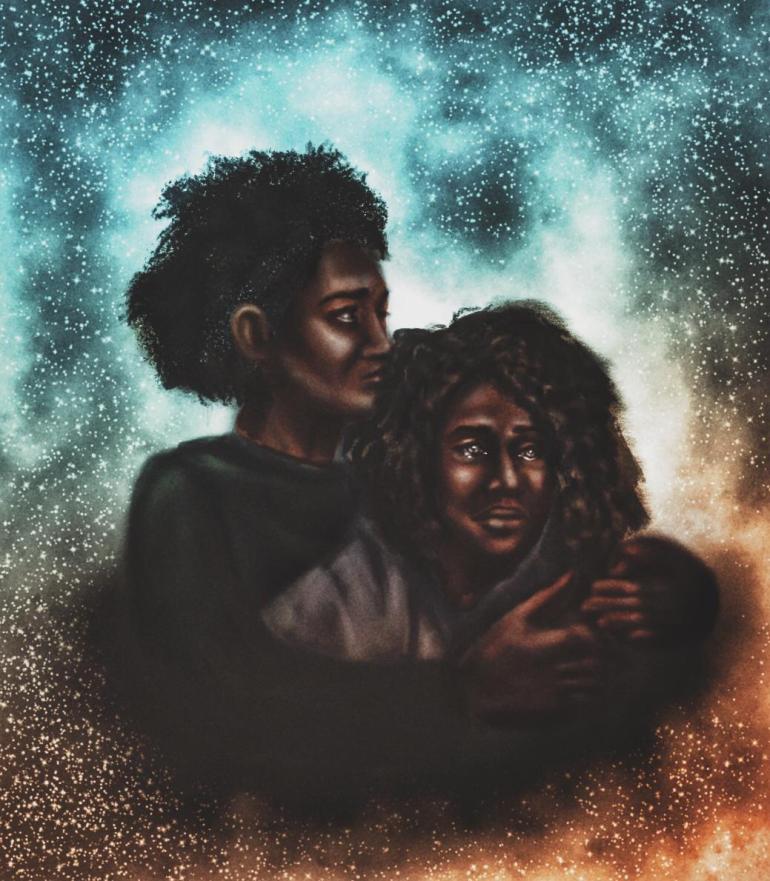 Kanisha took some time to introduce herself and talk about the story she wrote for Ahlaam, which is titled “You Must Think Me A Prince”. So without further ado, here is Kanisha!

“Hi! My name is Kanisha. I’m from the twin island Republic of Trinidad and Tobago. That’s in the Caribbean. I started writing when I was in primary school, really early. I used to love writing stories. That could’ve been… Probably like, maybe sixteen to eighteen years ago.

My influences would just be trying to express the dreams that I would have had. I really do love story-telling, so it didn’t exactly matter what I was talking about; I just wanted to tell a story. I do write mostly for fun. The only story that I’ve shared outside of friends would be the story of Ahlaam. I do share my poetry, but it’s really just for fun.

So in the story of Ahlaam, she is grieving over the loss of her husband, with the help of her sister. It’s just about a journey through her grief, and how she is able to cope and deal with it, and the support systems that she has.

In the story, Ahlaam is supported by her sister. What I really would like readers to take away from the story is that most of us—I know especially myself—don’t know how to cope with someone else who is grieving. It is not necessary that you have things to say, or you know what to do at that time. And it’s just about being there and being in support. So the way that her sister deals with Ahlaam’s grief, that is what I want readers to really focus on in the story.

I do think that Ahlaam’s character is very sure of herself, she is very sophisticated. Like the character, I think her voice would have to be very smooth, very calming, just so charismatic is how I would think about it.

Well I wanted to join the Wise Not Withered project because I just feel like Ahlaam’s story was meant for me. Like it was fated that Juliana approached me with the story. I have very vivid dreams, and the way that Ahlaam’s story was pitched to me was more or less the same. So I identified with the character in terms of shared experience. That’s really why I really wanted to get into it. As well as I’ve never had anybody approach me to write a story for them before, so I thought it was a very interesting opportunity that I just couldn’t let pass me by.

It was a good experience, I loved actually writing the story. I loved the feedback that I got. It was different, it was new. It definitely made me feel like I could do this again.”

I love that Kanisha said she imagined Ahlaam’s voice to be smooth, calming, and charismatic, because I would use those exact adjectives to describe Kanisha’s voice!

To end the episode, I’ll be reading an excerpt again:

“‘Ahlaam, wake up, you’re crying. You must have had another nightmare.’

As Tia shook her out of sleep she felt the moisture on her face, the wetness of the pillow below her. She looked at the empty space next to her again and began to cry in earnest. It was Monday. Her sister had come to bring her breakfast. And her husband was dead. The grief descended with intensity, folding her being in onto itself. Stealing her tongue and leaving her in tears. No matter how much Tia begged, Ahlaam continued to wail.

She could smell the scent of eggs scrambled with butter just the way she liked them. Just the way Yaromir used to make them for her. He hated those eggs, but every time she felt ill or sad he would make them especially for her because he knew they made her feel better. The salty scent of bacon and the fluff of pancakes accompanied the eggs. But for all their deliciousness, they made her feel sick. Tears blurred her vision as everything faded away again.”

Stay tuned for more Wise Not Withered character showcases, every Sunday until the end of April, 2020!